October 2019 – Deborah Hunter, Karakul Shepherds Alliance Founder and Registrar, presented at the Livestock Conservancy Annual Conference in Santa Rosa, California. Although all of us were significantly impacted by the Northern California Kincaide Fire complex and the conference center was evacuated the next day, Deborah presented on Counting Sheep – Finding Rare Bloodlines and Hidden Pockets of Diversity .
Abstract: Between her 1980s to 90s shepherding experiences and finishing graduate school, Deborah became aware of the negative effects of Karakul flock book closure on both sheep and shepherds. Karakuls are easy care, fat-tailed sheep that thrive in tough conditions. The network of collaborative breeders disappeared when the flock book closed, but isolated sheep flocks remained and were bred pure for decades. Genetics became concentrated, but the breeders did not know who or where the sheep were. During this presentation Deborah will outline the methods used to collect census data, the perfect time of year to conduct a shepherd survey, and questions that gave highest value in the final report. She will talk about historic Karakul bloodlines, new bloodlines and the different types of lines, the “hidden” flocks located, and how our shepherd demographic has changed. Watch the video to see what was found during the census and the Un-census! (47 minutes long, Q&A not recorded)

May 2019 – Dr. Norton and Page Jacobs obituaries  Unfortunately most Karakul shepherds did not learn of the Jacobs’ back-to-back May deaths until June 19, three days before their Memorial service. To begin to honor their lives as Karakul shepherds, a 1988 letter of Page’s became the basis for a Karakul Tails & Tales newsletter story about the Jacobs’ Karakul show string link with Lowry Hagerman. The Alliance would like to continue to honor the life of these two influential Karakul shepherds by collecting stories in the Alliance blog about funny, charming, likeable Page and Norton Jacobs. See photos of them in show rings on Gatherings page.

September 2018 – Peter Davies A Life Well Lived written by life partner Mark Scherzer. WHAT A STORY ABOUT PETER’S LIFE! These men created the line-bred Karakuls Peter Davies Memorial Bloodline. (More information coming soon under Bloodlines.) The touching biography is part of the Turkana Farms Green E-Market Bulletin, so Peter’s story is followed by This Week’s Offerings From the Garden. Read a fantastic story, get to know more about fellow shepherds while gaining insight into a productive, successful farm, with Karakul sheep as one featured Heritage breed. Their Karakul ewe flock is half of the Turkana Bulletin banner header-photo. Without the Karakul photo, here is a link to the blog post in Germantown, New York from IMBY, In My Back Yard. https://imby.com/germantown/article/a-life-well-lived/

2018 Nov-Dec sheep! magazine – Karakul Earns his Bucks Worth I wrote a letter to editor Nathan Griffith of sheep! magazine telling him about Max’s fleece. This not-quite-six-month old hoggett lamb fleece made over $50 and sold within hours of shearing.

December 2016, a one-page article Karakul Sheep: Their American History, was the inside back cover of The Shepherd magazine in their feature “Focus: Karakuls”

December 2016, two articles were the back pages of The Shepherd magazine in their feature “Focus: Karakuls”; the first Pine Lane Farm Karakuls, by Letty Klein; the second American Karakul Sheep, by Deborah Y. Hunter and Julia DeVlieg

Karakul sheep have a unique place in American culinary history. Karakuls were nominated in Slow Food USA – Ark of Taste

June 18, 2015–The American Karakul circle of breeders lost a valued friend. Read a bit about Myrtle Dow’s life before she became a shepherd of Black Pines Sheep. Below is a small collection of photos from the Estes Park Wool Market sheep shows (Colorado) June 1996, with Myrtle doing what she did best in the world of Karakul & Natural Colored sheep. 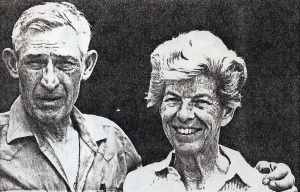 BACK TO PAGE TOP

Blogs You May Enjoy

Alliance tri-fold Brochure, an Informational Journey in Photos--order in packs of 5, 10 or 20; $1 each brochure shipping included

where the flocks gather

where the flocks gather